Timber frame technology, so underestimated in our country, reached us from Scandinavia - a place with a much harsher climate. Inhabitants of these regions value this type of construction primarily for its quality, energy efficiency and environmental friendliness. Contrary to popular belief, this technology is characterised by a very high level of quality, which is maintained by restrictive standards that must be met by the buildings erected there. This requires knowledge, accuracy and experience. We know this best because we have been operating on this market since 2012. Our mission is to introduce and popularise this technology in our country while maintaining the highest level of performance. The only reason for all the drawbacks associated with this type of construction is the lack of experience and inaccuracy of contractors. A well-made timber frame building is characterised by minimal heat losses, it is also possible to adapt it to the passive house standard. The structure can be built at any time of the year, and the time needed for erecting it is a maximum of 3 months. However, these are not the only advantages of the technology discussed here - we have summarised it all in a clear and transparent form for you below. 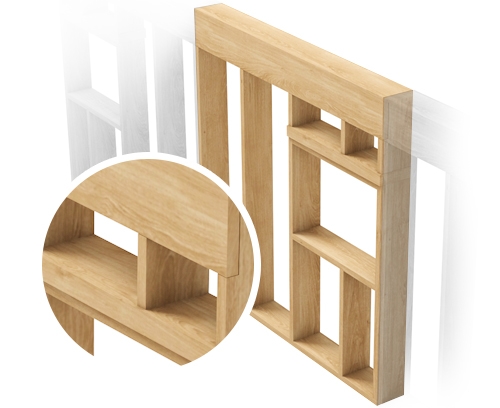 The main material of the building frame is construction timber planed on four sides with a quality certificate of an appropriate strength class (min. C20). Construction beams are 45 mm thick, and 600 mm apart. This distance is also maintained for the window openings. The structure is topped with the hammarband (ridge or main beam) and the upper beam, and at the bottom there is the bottom beam. The layer of insulation is placed between the joints of the walls. 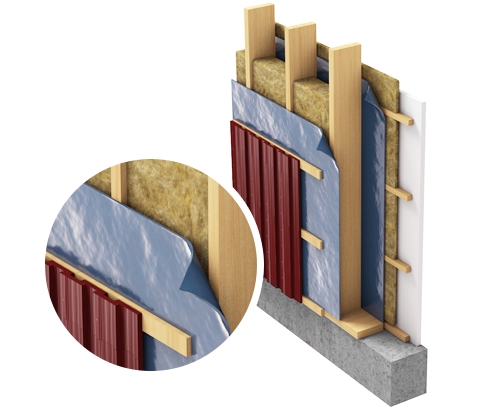 A cross-section of the building wall

The basic structural element is the wall which is built up of several alternately arranged layers. One of the most important elements from the inside of the building is the vapour barrier, which is its seal. All joints, cracks and holes should be tightly covered with it, because it prevents cold penetration at sensitive points, such as joints in walls and ventilation ducts. After installing the foil, it is possible to perform the building leakage test known from Scandinavia, consisting in increasing the pressure inside with special blowers and observing it using thermal imaging cameras. The correct installation of the foil prevents the heat from escaping from the inside in winter and the heat getting in from the outside of the building in summer.

Another important detail when using the facade panel is to create the so-called ventilation duct between it and the main structure of the building. This performs the function of drying and draining moisture from the thermal insulation.

In rooms exposed to moisture, such as bathrooms, the wallpaper-resembling waterproofing is applied on plasterboards, covering the entire surface of floors and walls, and in the case of toilets or laundry, on the floor with a 15-centimetre band.

Construction of the house usually takes no more than 3 months, this time can be further reduced when we prefabricate the structure beforehand.

The cost of erecting the building is much lower than comparable traditional brick technology.

The use of durable materials and the quality of their assembly guarantee durability, as confirmed by demanding customers from Scandinavia.

The house is assembled on a foundation slab, transferring the weight evenly to the ground.

Construction throughout the year

You can start building your house at any time of year, even in winter.

High fire resistance is ensured by the materials used for constructing the building, which primarily include construction timber planed on four sides with rounded corners.

About 80% of the structure is made of several alternating layers of  materials providing sound insulation.

A passive building should be airtight and equipped with a mechanical ventilation system with recuperation, as well as a heating system using renewable energy .

This is a particularly important advantage if we plan to build a small house first, and then expand it in the future. We can also replace the installations with more modern installations without major problems. 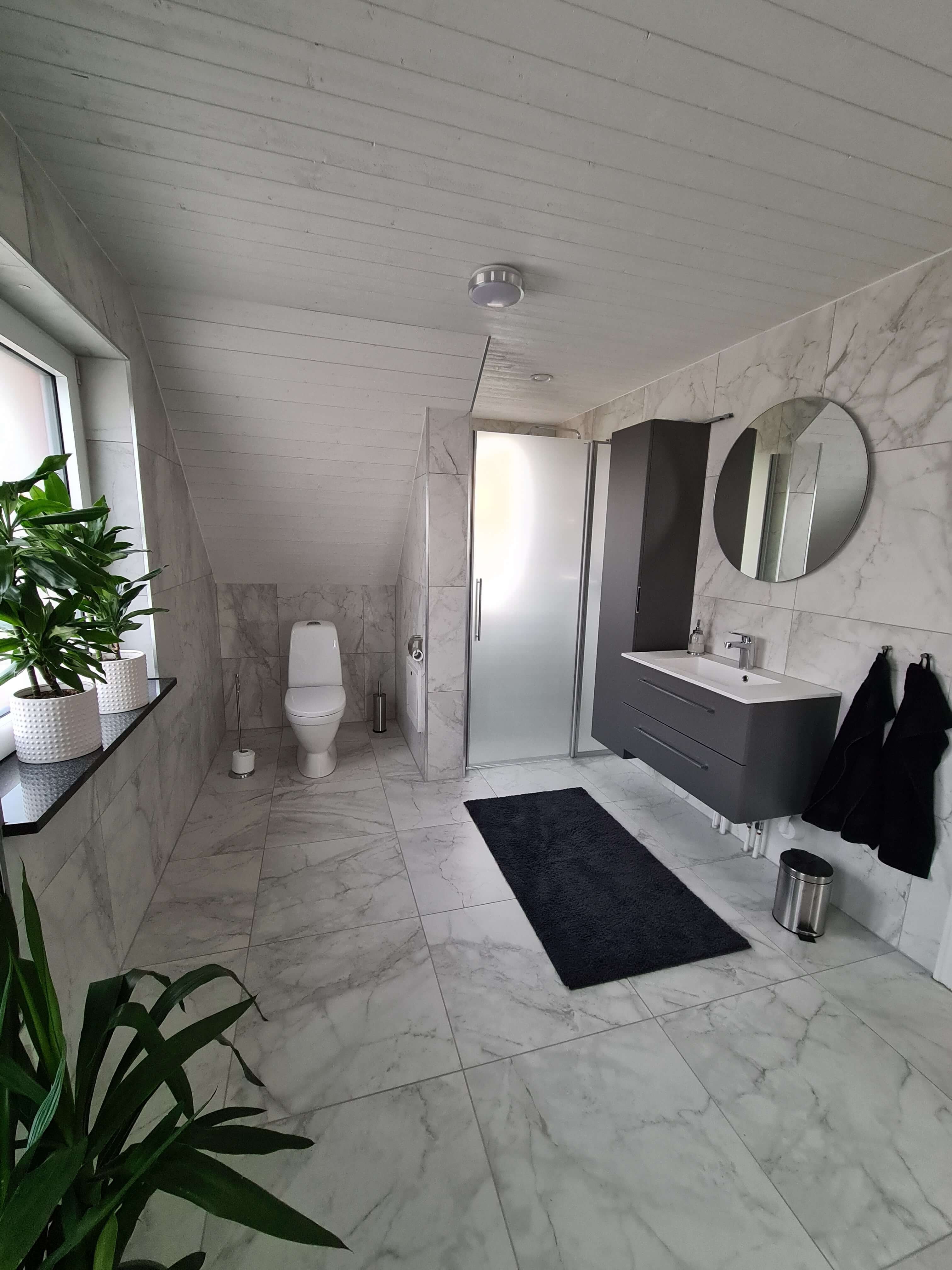 Spångsholm/ Bathroom in the attic in a wooden house 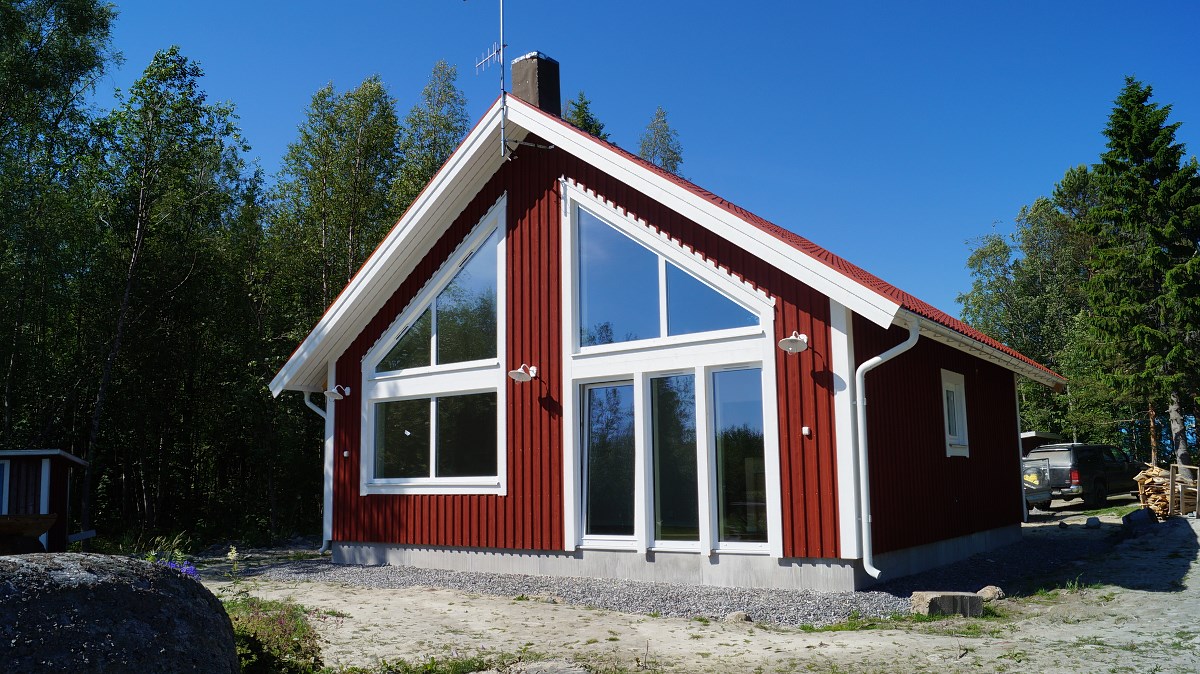 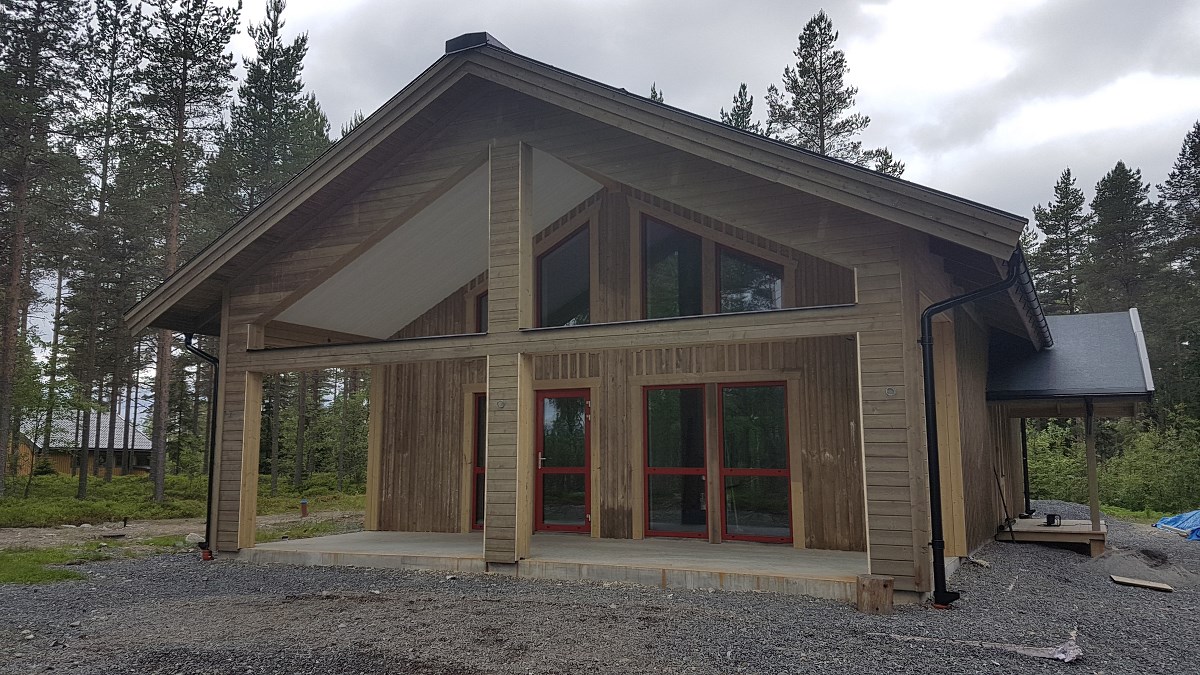 Sillviken/ house (prefabrication of the frame construction and assembly)